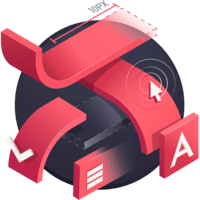 Use Keyframes for Fine-Tuned Angular Animations

When easing isn’t enough to get the exact animation you want, you can leverage keyframes to define and precise styles and steps over time. Keyframes allow you to achieve pretty much any Angular animation you want.

Now from our fine tuned control of transitions, let's do a transition from void to anything, so when we click that initial toggle button, we'll want an animation. We'll animate for five seconds, and then instead of using that string based syntax, we used below, I'm just going to say comma and keyframes.

I'll say style, pass in an object of transform, and we'll scale this to zero, and then duplicate this a few times. We're going to have six steps here, and you can think of this as this five seconds being a zero to five based index where the first step is zero seconds, the second step is one second, third step is two seconds.

We'll hit toggle, out and in, and back out, and in, and all the way to 100 percent. These styles will work on colors and any other CSS properties. Widths and heights, so you can go to town building crazy animations like this.