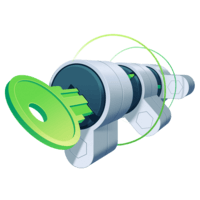 Configure local and remote port forwarding with an SSH tunnel

Learn how to configure SSH tunnels with local and remote port forwarding. This allows you to bypass intranet firewalls and setup persistent connections between your local host machine and a remote server.

Instructor: Let's say you are on a network connection which is blocking access to a specific website. You can easily get around this with an SSH tunnel and local port forwarding. The -L flag is what tells SSH to open a local tunnel.

In this example, you will forward the local port 8000 over to yahoo.com on port 80 of the remote host. Lastly, specify the SSH server you wish to tunnel the connection through. This is the server where the final request will be passed through.

You can use this method to get around intranet firewalls, as well as connecting to blocked remote services.

To kill the tunnel, use the kill command, followed by the ID of the running process.

Another way to use SSH tunnels is to forward remote ports. This will forward connections on a remote host back to our local host machine. This is useful if a user wants to access your local host machine but, for one reason or another, is unable to connect directly to it.

Note that remote port forwarding is disabled on SSH servers by default, so you need to edit the SSH t config file. It is typically located at /etc/ssh/ssht_config. Once open, set the gateway ports configuration value to yes, then restart the SSH server by running service ssh restart.

The command to establish an SSH tunnel is similar to before, but you use a -R flag rather than a -L flag. The first value defined is the port you wish to listen to on the remote host. Port 8000, followed by localhost, followed by the local port that requests should be forwarded to, in this case, 3000.

Then, of course, specify the SSH connection string of the remote host to use for the connection. Now if you load that URL on the remote host or IP on port 8000, it will tunnel requests to port 3000 on a local machine.