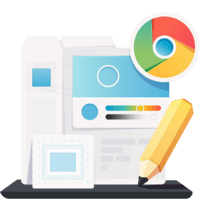 Debug the DOM in Chrome with the Devtools Elements Panel

The Element Inspector in Chrome DevTools offers powerful integration with the console - learn how to programmatically navigate your selected element, how to search through the history and use CSS selectors to control what you're looking at and how to quickly and easily listen for events as you debug your application.

Another excellent feature of the Elements panel in the Chrome DevTools is that you can press Escape to open the console. This slides in as a third panel in addition to the structure and the style. It has some pretty special features.

You've got zero through four, so the five most recent elements are available to you as a stack. You can do things like treat them as an array here, whatever. If you're doing some kind of like console jockeying and you need to remember the stack of the things you've cared about, this is a great way to do that.

You're thinking, "Oh, crap. This was like if I had jQuery like I used to back before I discovered React, I'd be able to write a selector for kitten. Now, I have to remember the DOM. Oh, crap. How do I do that?" Don't worry about it.

Chrome actually does this cool thing for you, which is even if you don't have jQuery, you can still use the $ with a selector pattern. It's going to return a reference to that particular element. Note, here in my code base, I have multiple spans. I've got a couple up here. I've got a couple down here inside of my headers.

If this were actually jQuery, then by saying this, I would get a collection of all of those spans. Instead, I'm only getting the first one that it finds. In order to get that collection, I need to use two dollar signs. That's going to return a list of all spans.

Because it's XPath, that's always going to return a list of all nodes that match your selector even though you and I all know that in this instance, there's only the one div inside of the body, inside of the HTML.

Those are all various ways that you can get references to different nodes. You'll notice that just because I got a reference to a span, doesn't mean that I made that span selected. What I can do is call the Inspect function on that reference. Now, I've actually told my Elements panel to select that.

From the console, we can both read and write to the state of the Elements panel. That's pretty powerful. There's one additional cool console command that they added. That has to do with monitoring events. This is getting into another panel here which there's a lot of stuff going on. Let's look at it from the console standpoint.

If we type monitor events, and then we give it a reference to some DOM nodes, let's create a reference here to H1. We're going to listen all click events. We've said monitor events. Every time somebody clicks on in H1, I want something to happen.