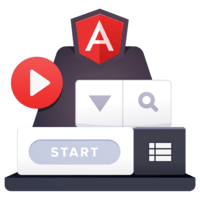 You can generate Angular 2 components using a combination of ViewContainer and ComponentFactory, but you must always remember to add the components you want to generate to your list of entryComponents otherwise the compiler will optimize the component class out of your project.

Our home component can actually add this widget3 dynamically. To do that, we need an element with a ref on it. We'll call this ref Container, and this gives us the way to look it up using ViewChild. So, ViewChild, and we'll look it up by that string of "container," call this container, and make sure to import ViewChild.

Now in ngAfterContentInit...AfterContentInIt, again, is the one where the ng content has been rendered, so you have access to everything inside of the template and can add things before ngAfterViewInIt fires. With this container...let's just log it out and look at what it is. Let's save.

If I open up the dev tools again, now we have a ViewContainerRef, which has some methods on it, like this.container.createComponent. CreateComponent takes what's called a component factory. To create the component, we need to pass a ComponentFactory into here.

We'll look it up by Widget3. Let's make this a bit more readable. We'll say const WidgetFactory is the resolver, Resolve ComponentFactory Widget3, and pass in the WidgetFactory. This actually isn't going to work and the dev tools will show that. This'll explode on me, saying that it cannot find ComponentFactory for Widget 3.

Even though in Widgets module we declared these and exported them, that simply means, if a selector is used, so before we had Widget3, if this selector is there, then bundle Widget3 inside of there. But it would have discarded Widget1 and Widget 2, because, even though they're exported, they're not being used in a selector somewhere so it would seriously save on the bundle size.

Basically, if you want to hard code and make sure that the compiler includes the components you want, there is something called entry components, and you can add Widget3 there. This is saying that somewhere in my code I am definitely going to use Widget3. This is usually with the createComponent and the component resolver.

As you can see, we referenced it here. Somewhere in my code, I'm going to use this, so please, please, please don't get rid of this. Compile it in, and let me use it as a component. From here, there are no more errors. You can see that no errors thrown, and we simply have out inputs.

Right now, we actually have the input being added here, and that second input, let's delete that one. You'll see this is just one input, and I can type in there. I can actually just create a whole bunch of these guys, hit save, and then it'll add all these different widget factories.

Each widget factory will create a new instance of this component when you invoke CreateComponent, so you've got a whole bunch of Widget3s on the page that were provided by the widget factory, created by the ViewContainerRef, and that widget factory was found by resolving ComponentFactory, as long as you defined it in your entry components.