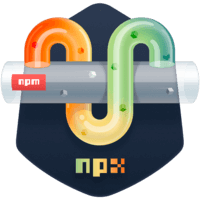 Using npx we will test out different versions of a node module from the command line. Depending on your use case you may also need to utilize the -p flag that will temporarily install certain dependency packages during.

Instructor: Let's take a look at the latest version of create-react-app on NPM. We could use npm view, or we could just use one of the aliases of info, show, or just V. Then our name, and we could ask the version, which is currently at 1.5.2.

If I pull up the command again, and then add an S, we could get a list of all the versions, which could get a bit overwhelming. What I'd like to do is try out a version of an upcoming release. In particular, one of those -next releases.

However, those tags are a bit messy. Let's try npm v create-react-app, which will list some dist tags near the end of the output. Dist tags provide aliases for version numbers. In this case, React maps next to one of the 2.00next tags we were looking at earlier. That makes it much easier to type.

Once it's installed, we can navigate to the app, and kick it off with npm start. Voila, we have an app running that was bootstrapped with the next version of create-react-app. However, things may not always go as smoothly when you install canary, alpha, or beta dist tags.

For example, let's take a look at ESLint. We'll create an example project, NPX-ESLint, quickly create a package.json file with npm init -y, and then create an ESLint config with npx-eslint --init. In this case, we'll pick the Google style guide, and we'll install the appropriate dependencies.

Let's update our ESLint RC file and add parser options, ECMA version six, and save our changes. Before we start playing around with ESLint, let's create some problematic Javascript code by echoing let X equals one, semicolon, Y equals two, and redirect that to an index.js file.

As we did before, let's npm view eslint. You'll see there is a next dist tag pointing to the 5.00RC.0release. Let's go ahead and try that out with npx eslint @next, passing our current directory to be linted. Oh, well it appears that we need a module that can't be found in order to run the next release of ESLint.

Thankfully, NPX has us covered. We could use the -p flag of NPX to specify packages to install, and add that to the running $path. We could try that again with npx -p eslint @next -p eslint-config-google. Then -c to execute a command.

In our case, eslint./. Now, NPX will temporarily install the next version of ESLint, along with the eslint-config-google dependency that it needed, and then executes the ESLint to lint our project. Voila, it found our linting error.