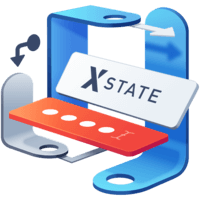 Finite state machines force you to do some up front thinking and be explicit about the states and transitions that are valid for your program. We’ll use the XState visualizer tool to create a state machine to manage an http request.

In order to make the network call we will use three pieces of state.

Create folder for our machines and add first machine

We can define our events as such:

Add actions to our machine

"Actions are fire-and-forget "side effects". For a machine to be useful in a real-world application, side effects need to occur to make things happen in the real world, such as rendering to a screen"

Example of an action:

👆We pass this a second arugment to our fetchMachine function

We import the machine into the App.tsx component and use the builtin xState hook useMachine to provide fetchMachine with the actions to execute

Instructor: 0:00 Here I have a React app at with a single component whose purpose is to load a list of "Star Wars" characters and display them on the screen. Fetch people uses a mock network call to simulate latency and the chance that a network error will occur.

0:16 In order to make this network call, I need three pieces of state, isLoading, results, and error message. I need to be very careful to set these variables to specific values in order to display the correct UI for my app.

1:10 Even though I'm trying to be careful with how I use these variables in conjunction with each other, there are still some bugs with my application. When I click Fetch, it loads the data successfully. When I click Fetch again, it shows an error.

1:51 What if I mash this Fetch button? I just triggered seven network calls, and then the responses for those network calls came back in a random order, and updated my UI in really unexpected ways. Let's rewrite this code to use a state machine to help solve these problems.

2:12 I'll make a folder for my machines, and make a fetchMachine folder, import machine from XState, and export our fetchMachine. Machine has an ID, an initial state -- we'll say our initial state is idle -- and a list of states.

2:38 The first state is idle when no network call has been made yet, pending when a network call is in progress, failed when there's an error that's been returned, and successful when a valid response has come back.

4:05 It would also be helpful if the machine kept track of the data that was returned by the network call. We'll store this data in the context object. We'll have results in the context object and an error message. We want to set the results when this transition happens. Let's change this transition from using a plain string to using an object here.

4:31 This object with a target key is synonymous with the plain string that we had there before, but the object allows us to add a few extra properties to this transition. We're going to fire off some actions at the same time as this transition happens. We'll use the set results action. We'll define that action in the second object of the machine function.

4:52 We'll add an actions key. We'll create the set results key and use the built in assign action that comes with XState. We'll put a function that takes the previous context and the event that made the transition, and then we need to return a new object that will get merged into the existing context.

5:12 We want to set the results value to event.results. TypeScript is complaining here because XState thinks that this event only has a type property on it. We'll set the event to any here to bypass these restrictions for now and later we'll add in some typings.

5:34 When this resolve transition happens, the results property on the resolve event will be passed into this assignment action and get set on the results inside of contacts up here. Now let's do the same thing for the reject transition.

5:50 Make this an object, add an action on here of set message and then we'll add the action here, assign the context. We'll set the message property to the events message. Now that we have some actions, we'll paste our machine code into the visualizer again and make sure to remove any TypeScript types and click Update.

6:24 Now you can see that the resolve and reject transitions specify what actions are being triggered during that transition. Our machine is great except for actually fetching any data from the network. Let's add that as an action. When we enter the pending state, we want to trigger the fetch data action.

6:45 We'll set it to fetch data but this action is not going to be defined inside of the machine itself. We're going to define it inside the component where the machine is used. Let's go to the app component and wire up this state machine. Import the fetch machine and import from XState React the use-machine hook.

7:08 Instead of all these state variables, we'll set up a fetch state and send to fetch machine. We'll use the machine, fetchMachine. Now there's a second parameter here for the use-machine hook in which we can set the actions that we want the component to override.

8:28 Already, we've gotten rid of the need to set the is loading flag to false in both of these branches. Down here for this button click, instead of calling a fetch data function, we will just send an event to the fetch machine of type fetch.

8:46 Since we don't have the isLoading Boolean, we need to use that fetch state.matches pending to display a loading message. This is when the fetch state matches the successful state. Here, instead of this combination of Booleans, we just say, "When the state matches the failed state." The results are not in this component.

9:17 We need to get those from the state machine, the context.results and the context.message. Here TypeScript is complaining that results could be undefined. Let's change this to an empty array and change our message to an empty string.

9:57 The state's interface lists out all the states available. We'll make a type for all the events that are available on the fetchMachine. The context interface tells us what the context looks like. Then we add in the context, the state interface, and the events here. Now on our app component we can see that the context knows it has either a message or results object.

Also it knows that the reject event needs to have a message property on it. Let's see this app in action now. Now we can click Fetch. It loads the data. Fetch again, shows an error. If you click the Fetch button lots of times, it only makes one network call and one successful return.