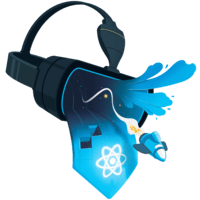 In order to illuminate a scene containing 3D objects a lighting setup is required. In this lesson we'll walk through the available lighting components and create a common outdoor lighting setup.

A handy demo for <SpotLight/> can be found here.

When rendering 3D scenes, we can define a lighting center. For demonstration purposes, our scene already includes a couple of objects positioned in front of us, and the property lit is set to true, so they're affected by the lights.

In order to create a lighting center, we can leverage a handful of lighting sources that ship with React VR out of the box -- AmbientLight, DirectionalLight, PointLight, and SpotLight. Let's get started with the AmbientLight.

We remove the AmbientLight and move on to the DirectionalLight. It's a light that gets emitted in a specific direction. It will behave as it would be infinitely far away, and the rays will all come in parallel. Same as AmbientLight, it accepts intensity as well as color.

When you position it, keep in mind that it shines towards the target's position, which in React VR's case is us. DirectionalLight is often used to simulate daylight, since the sun is far enough away that its position can be considered infinite.

The third source we're going to explore is PointLight. We position a PointLight right in between our objects. As you can see, it gets emitted from a single point and spreads outwards in all directions.

A common use case for this is to replicate the behavior of a light bulb, but compared to the light sources before, this one offers additional properties. For once the distance, which describes the distance from the light to where the intensity goes to zero.

By default, this distance is set to zero, and when set to zero, the light will never stop. In our case, we set it to two, which means in a radius of two meters the light dims to an intensity of zero.

Now this intensity itself, the case can be manipulated by the property decay. Its default is set to one, and in our case we set it to two, which leads to physically realistic light falloff.

Last but not least, we explore the SpotLight. Similar to the PointLight, it originates from a single point, but compared to PointLight, it spreads outwards in only one direction in the form of a cone.

It also supports distance and decay, but also two more -- penumbra and angle. They're a bit hard to explain and demonstrate, so best way to explore how these parameters affect each other is to play with the demo on the free JS documentation.

Here you can see how distance affects how far the light shines. Angle means how wide or small the cone is. Penumbra is how sharp the light is, and decay is the effect of how the intensity actually decays.