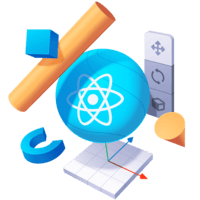 Native Modules provide the ability for React 360 app code to call back into your runtime, and provide functionality that's only available in the main browser environment.

Over here, we have the updated places array and each object inside of this array has a name, flag, and a panorama property. We're getting those over here in the flag method.

I am going to pass in the name to change background method, get it over here as well. In order to change the title of the page, I am going to do document title equals welcome to plus name. After I save, in their first inaudible , we're going to have a problem.

The problem is that as soon as I click on the flag, we're going to get a message, "Document is not defined." It is not defined because by default, the React 360 runs inside of web worker, and web workers do not have access to the DOM.

In order to enhance our React 360 application with something that requires the DOM, we need to implement our value on native module. In order to do that, first, go to client.js.

We need to specify constructor. This constructor is basically going to around the super method with the name of the class. I am going to do super title changer. Whatever is specified over here is going to be exposed to React 360 application.

I am going to create a new method called change title. It's going to take titles and argument. I am going to do document title equals title.

Next, we need to expose its native module to our React code. In order to do that, whenever we're creating a new React 360 instance, we can also pass in some custom options. Here, what we need to do is to pass in native modules. It takes an array. We're going to create a new title changer instance over here.

Next, we need to remove this document title caller, and we're going to do title changer, change title, and then I am going to set the title to welcome to plus name. Let's see if it works.

There're a plenty of native modules already implemented for us. If I decide to log all of those, we're going to see our title changer module as well as useful stuff such as networking, location, or history.