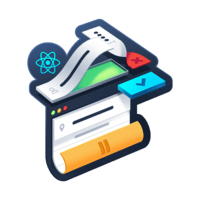 Bootstrap a create-react-app project with React, Redux, and redux-form

We are going to use create-react-app to set up a React app. Then, we are going to install redux and redux-form as dependencies and add Redux Devtools.

Instructor: We're going to use Create React App to bootstrap our new application. Let's call it "Awesome Form." Then, we can open that in our text editor.

Next, we need to specify Redux Forms form reducer as one of our reducers. Const reducers contains form, form reducer. In a realistic situation, there would be other reducers inside this object because a large application is likely to make use of several reducers, but for the sake of this example, we're just going to use what we need, which is the form reducer.

Let's also hook up Redux dev tools. To do this, we first need to check that the extension is available and then invoke it if it is. If we haven't done so already, we can install Redux dev tools from the Chrome web store.

Finally, we need to wrap our app inside React Redux's provider component, passing in the store. Now, we're set up and ready to use Redux and Redux Form inside our React application.